The BBC broadcast an exhilarating late night programme this week about the German artist Anselm Kiefer. He is an artist with an overabundance of energy, passion and resources which have led to the creation of a 200 acre sculpture park in the south of France which staggers my artistic and architectural sensibilities! Passion and drive are attractive qualities in artists and Kiefer combines these with the good fortune of being born at the very beginning of the German post-Nazi, post-war period, exploring the biggest human and political issues with disarming self-certainty. 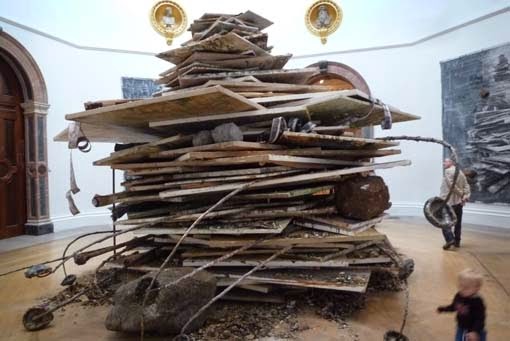 Early in October I treated myself to a trip to London and, in preference to the dry video-based offerings of the Turner Prize nominees, I visited the newly opened Anselm Kiefer exhibition at the Royal Academy. I had made absolutely the right decision and thoroughly enjoyed my two hours inside the galleries (particularly because it was chucking down with rain outside).

Kiefer is the very opposite of everything I normally stand for - I prefer tiny canvases in vibrant colour, touching on specific people and issues. And I'm proudly an artistic nobody, I have often wondered whether the size of an artist's canvases have a direct correlation to the size of their ego, reputation, workplace and bank balance. Kiefer's 200-acre French estate, hangar-sized studio and collosal artworks suggest he is some sort of art world Bond villian with an ego the size of a large planet, though unfortunately for my theory he comes across in the BBC documentary as thoroughly charming and genuine.

The Royal Academy exhibition consisted of a continuous feast of canvases, generally vast planes of encrusted paint, straw, wire, tar, mud and clay. Enormous sculptural sunflowers came to represent life (maybe mankind reaching to god) while the clay, mud and brickdust represented death and renewal ('dust to dust'). Many works contained sheets of maleable grey lead, no doubt a by-product of Kiefer acquiring all of the lead from the roof of Cologne Cathedral sometime in the 1980s! The physicality of his paintings impressed me most, not only in size but in texture, tangible objects rather than 2-dimensional studies on a flat plane. The centrepiece of the exhibition was a site-specific sculpture combining all of the elements of his paintings and, sublimely self referential, recycling used canvases as the main ingredient of the recipe.

Watch the BBC "Imagine" programme if you can. He's a difficult artist to ignore ...and apparently for the right reasons!
Posted by Sean K at 23:52 2 comments: