Artitecture - What Do Artists Do All Day? 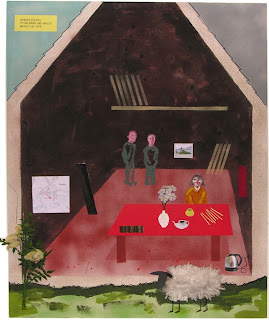 Interesting to see Wales-adopted artist Shani Rhys James is being featured in a new BBC4 edition of "What Do Artists Do All Day?", to be broadcast this month ...though unfortunately hidden on a channel that few people watch.

Not long ago Shani had the accolade of being the only living artist featured in Rolf Harris's TV series "Rolf on Welsh Art", so is clearly becoming a tele-genic art celeb!

I won't begin to claim credit for this success, but I came across Shani's work several years ago while I was studying Architecture at Cardiff University (and I more recently wrote the Wikipedia entry about her). For a 'primer' design project I studied a number of local South Wales artists and their workspaces. I then used some of my observations to imagine what Shani Rhys James' workspace might be like. This was before the days of Google Street Snoop and I only knew she lived in mid-Wales, possibly in a coverted barn building. Some of her paintings are VAST in size, so I conjectured her workspace was barn-like in size and character.

My work of 'artitecture' (pictured above) was intended to be tongue-in-cheek, with a graphic, descriptive element as a concession to the clinical white-and-balsawood world of the architecture school. In my view, my other works of 'artitecture' were better works of art, being based on actual locations, contents, measurements and observations. But it will be extremely interesting to see whether my predictions about Shani's studio were in any way correct!
Posted by Sean K at 14:34 No comments: