Apparently Wimbledon quarter finalist Marion Bartoli is also a painter and is currently completing a landscape triptych when she's not on the court!

It would be nice to think this is true, but then again it is probably the latest urban myth...
Posted by Sean K at 14:39 No comments:

...or whatever it is called these days, UWIC College of Art and Design? Cardiff Art College held its degree show last week and poignantly, after I'd signed on at the Jobcentre, I paid a visit. It is always a strange experience returning to the Howard Gardens building, which seems to be trapped in a time gone by and, like an old junior school, seems to be much smaller than I remember.

Earily still, in the 4th floor corridor there is a massive photo along one wall of the staff from the 1980's. I'm sure all of them have now retired or moved on, though the fine art technician of the time (Alan?) was still around, giving a talk to visitors about the exhibition. He exchanged a brief sort of 'Do I know you from somewhere?' kind of look.

As for the degree show it was a mixed bag as usual. In fact somed of the ceramics work was highly enjoyable and quite witty too. In contrast, a lot of the painting work was littered with far too many works called "Untitled". And where were all the artists' statements of intent? Are art students no longer expected to 'nail their colours to the mast', so to speak?!

Art seems to have decreased considerably in monetary value over the intervening 20 years. Ticket prices seem to be the same as (or less than) they were in the 1980's! Maybe this is partly because paintings have decreased in size too, what with the cost of paint and materials these days... Judging by the smattering or small red stickers, the public would only buy things that were small and under £200.

Anyway, aren't I in danger of forgetting that I'm now trained in architecture? Fortunately the WSA opened its degree show on the day CAD's closed. My egotistical unpaid musings as a blogging art critic will be suspended while I survey the displays of white cardboard, balsawood and over-complicated computer renderings in the Bute Building.
Posted by Sean K at 00:09 No comments:

I went on a cultural mission to see some galleries last week in Oxford's trendy area, Jericho. It was a bit of a disaster, one of the galleries was closed because of an event, another had its door locked for no apparent reason and a third seemd to have closed completely! 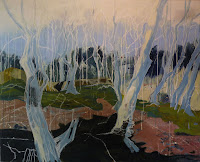 However, after a very long walk along the Woodstock Road I managed to find the North Wall Arts Centre (embedded in the north wall of a boarding school). In the foyer was a fabulous exhibition of paintings and line drawings by South African artist Catherine Charnock. They were predominantly based on an area of woodland, but there were also a few paintings of urban scenes. together with cars, street furniture and brightly coloured city imagery.

The small black and white line drawings were exquisite but the paintings of the woodland were brilliant, layered in bold colours using a wide variety of methods of application, including a lot of drips. The drips of paint and other marks extended around the edges of the canvas - as she says in her blurb exploring "the dialogue between the paint and its canvas support".

Thank goodness I made it that far, the one exhibition was just the tonic for sore feet and a frustrating afternoon!!
Posted by Sean K at 21:47 No comments: