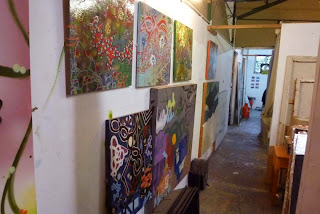 Had a fabulous afternoon today visiting artists' studios in Pontcanna and Riverside for the second year of the Cardiff Open Studios weekend. It's a great opportunity for artists across the whole of the city to invite members of the public around their workspaces, especially good for artists outside the "Made in Roath" catchment zone.

Pontcanna has the amazing Kings Road Studios which has been established for 20 years, now has a couple of dozen resident artists and an on-site micro brewery, would you believe! I was offered a mug of tea and a cake and had a nice chat with several of the clever and hugely talented occupants. It surprised me how many of the resident artists I'd seen or heard of before - this is obviously a hotbed of Wales talent.

Riverside claimed several hidden gems, including photographer Kim Fielding esconced with several other colourful characters behind the doors of the long-closed Wells Hotel. The building itself is impressive, retaining its old weathered pub signs. It even has its own resident ghosts, a pair of murdered nuns.

Finally I had the privilege of visiting the studio of Jacqueline Alkema, who I've known by sight for years and was one of the judges at 2013's The Gate Open Exhibition. Her paintings are simply delightful, tremendously thoughtful, multi-layered and brilliantly crafted.

It's just a shame the event is so poorly publicised. I found about it purely by chance and most visitors were already friends and neighbours of the artists. Come on Cardiff Council, pull your finger out for 2014!!

www.cardiffopenstudios.com/
Posted by Sean K at 23:44 No comments: 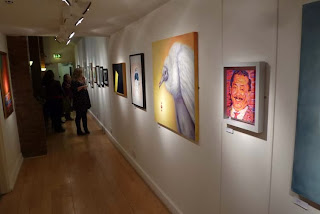 "Sean's psychedelic painting of Gaddafi" was shortlisted by judge Neale Howells for the 'Insider Art' award at the opening of  The Gate Open Exhibition last night. Well, I'll take that as a compliment, quite happy to not be part of the establishment. Though I'm not sure Vincent Tan would appreciate being mistaken for a Middle Eastern dictator!!!

The winner of the award was a flourescent painting of a beach scene.
Posted by Sean K at 11:47 No comments:

Taking it as Red 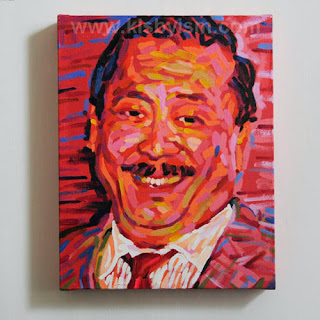 A subject that lends himself to a vivid colour portrait - the controversial Malaysian owner of Cardiff City Football Club, Vincent Tan. He changed the colour of the Bluebirds' football strip from blue to ...erm... red because it was a much more positive colour in his home country. His investment helped Cardiff reach the Premiership league for the first time in 50 years, so no-one should be complaining!

I like the colour red, so when it comes to portraying him on canvas I'm not complaining either. This one has been submitted to The Gate Arts Centre annual open exhibition and will be on view from 17th October to 15th November 2013. In the event that one of Mr Tan's friends, family or staff are wandering the streets of Roath in the next few weeks, I would suggest a version of this painting will look superb on the wall of the football club boardroom!
Posted by Sean K at 12:44 No comments: