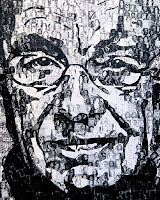 Britains Got Talent star and Cardiff Art College graduate, Nathan Wyburn, was in town this week exhibiting his food art. I dropped in today to see his work and have a chat.While making a portrait of Simon Cowell from marmite on toast may appear on the surface to be a populist gimmick, his art is quite thoughtful and being put to great use. He's become an ambassador for an anti-bullying charity, for example.

Nathan has also made a giant portrait of Rupert Murdoch (produced at the height of the Leveson Inquiry in 2012) made from small images of his phone-hacking victims. He's also made a recent portrait of the late Maggie Thatcher, poignantly using coal dust as a medium (she's fondly remembered by South Wales miners for defeating their strike and closing their mines). For me it's refreshing to find a young art graduate engaging with overtly political themes. He makes them accessible to a wide audience.

Personally I like the temporary nature of his works. They are sometimes made from perishable foodstuffs. They also often take topical personalities and events as their subjects. It's another challenge to the commonly held idea that art is timeless and universal.

Nathan says he's been constantly busy in the UK and overseas since he graduated last June. Of course, I'm very jealous, but very pleased to hear it all the same! I'll, erm, toast his success *groan*
Posted by Sean K at 16:40 No comments: