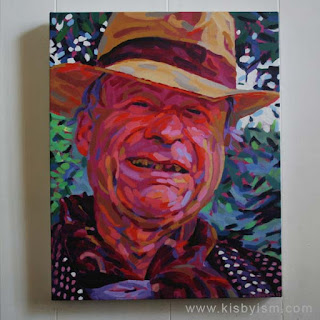 My latest portrait, of a well-travelled gentleman. I took the mid-purple base layer of paint as my starting point. It has been allowed to sing through the cool greens and blues to create a certain vibrancy. Actually I'm particularly pleased with the neck scarf, which was already patterned and multicoloured before it was successfully Kisby-ised.

Paul's partner was also delighted with the result, I've been told. She thought it captured his exact likeness as well as his "complexity of mind, the boy with-in, the joy and the stubborness". Well, his unique dress sense and lively face were clues to his character in this case.

I'm led to believe Paul has twelve siblings, so hopefully I'll be commissioned for an epic recreation of Leonardo's The Last Supper, haha!
Posted by Sean K at 13:14 No comments:

Art in a pickle 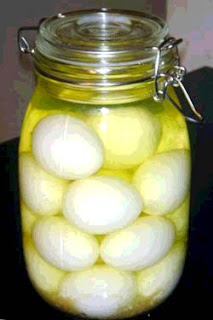 Yesterday The Independent proclaimed that Damien Hirst was in a bit of a pickle as his art prices plummeted to only $600,000 for one of his 'spot' paintings. Oh how my heart bleeds! Most of us can only dream of getting a tiny weeny percentage of that price for our pain and toil!! This rather sounds to me like a price correction, something that has happened to other valuable assets since the current recession began to bite.

Damien Hirst respresents both the good and bad of the art world. He is evidently a confident, creative personality whose work often deals with the great imponderables, of life and death. I remember seeing his blood-spattered crow paintings at Hoxton's White Cube and found them imaginative and interesting. On the other hand he seems to have become lost in his own ego and tremendous wealth, producing things that are enormous, shiny and vulgar. His giant pregnant females look like the very worst examples of public art, while his diamond encrusted skull showed him unashamedly flashing his 'wad'.

The Independent article also reveals again how the art market often operates like any other market. Hirst's dealers have been shown to stockpile his vast output to keep prices artificially high. There are allegations that his representatives are bidding up his prices at auction events. Testament again, if any were needed, that art has been transformed into a tradable commodity, while artists are providing a (admittedly slow and inefficient) factory line of desirable products for the public. Thinking about it, maybe Hirst is deliberately attempting to reveal to us the worse aspects of the world of art. Otherwise I'm not sure whether we're being pickled or stuffed!

Fauvism in the blood 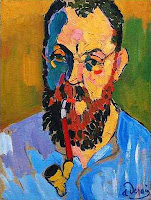 I mentioned to my father last week that I was reading a book about Fauvism. He immediately blurted out the name "André Derain". This was apparently the only artist name he could remember from his school education, in the dim midsts of the twentieth century. There must be something distinctive about Derain, because he is probably my favorite artist. I particularly like his 1906 painting of his friend, Henri Matisse.

There are other reasons I can identify with Derain. He initially trained as an engineer, before dropping this in favour of a career as a painter. He seemed to be a person who led by his heart and his head, finding painting sometimes a stuggle, a lengthy cogitative process. I rather like his 'warts and all' attitude to his subjects. Like several other of the Fauves he did not shy away from painting 'reality', for example the clutter and jumble of traffic on the River Thames.

But judging by my father's selective memory, maybe my enchantment with Derain has been passed to me in my blood!
Posted by Sean K at 12:20 No comments: