Part of the Wallpaper

While renovating my tiny kitchen in my Victorian terraced house I came across a patch of 1960s wallpaper behind a panel. It was a boldly coloured floral pattern in acidic shades of blue. I liked it and kept it, framed behind a sheet of perspex. I’m surrounded by remnants of old hearths and chimney breasts that no longer serve a purpose. My living room proudly retains a lead-based paint encrusted sash window. 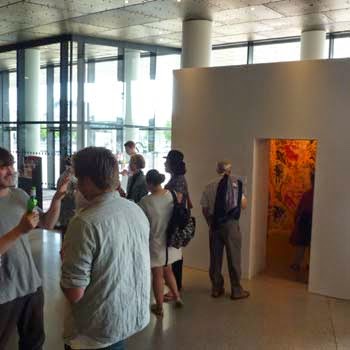 Therefore I can relate strongly in many ways to Shani Rhys James installation, Florilingua, which was opened to the public this weekend inside the Wales Millennium Centre, Cardiff. I enjoy paintings which take on another dimension. Shani Rhys James is one of Wales’ best known painters, recognised for her giant canvases which often take her own image as the subject.  But Florilingua expands to take on three dimensions and a sensory explosion of colour, sound and smell. Ostensibly it purports to speak about the domesticity of the lives of Victorian women. A bold floral ‘wallpaper’ pattern, painted by the artist, covers the interior walls of a bunker-like room constructed in the WMC concourse. From the ceiling hangs a small and suitably sombre black chandelier (bejewelled with rich red crystals) which illuminates the room. Poetry in English and Welsh can be heard, while the female poet’s lips mouth the words from a tiny screen in the middle of the far wall. 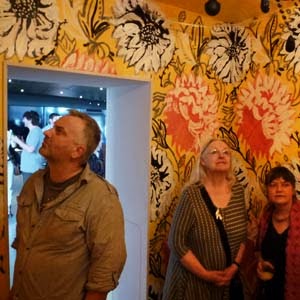 Even the solid construction of Shani’s bunker speak about the strength of Victorian domestic architecture. Contrary to Britain’s 19th century vision of male dominance and female subservience, nay invisibility, Florilingua resonates with a strength and depth. The rich yellows and reds are not restrained in any way, while the heady smell of fresh oil paint could render a small child unconscious! Maybe this installation is a physical respresentation of Shani’s multi-facted and opinionated persona (which belies her diminutive stature). I heard more than one person exiting the room commenting that they felt they had just experienced what it was like to walk into the middle of one of Shani’s paintings.

There is something quite incongruous about this unassuming white plywood box on the edge of the vast WMC concourse, but it’s a great setting which emphasises the extremes going on here. If anyone is heading down to Cardiff Bay then go search it out!

Ex in the City

My self-reflective object making, "Painting of a Diary", came to an end on Saturday 7 June. On the same day Cardiff School of Art's final degree show opened at its Howard Gardens campus and, to my surprise, the stand-out student work for me was not in the painting category at all.

This is the last event to take place at the 48 year old art college campus, before it relocates to the leafy suburbs. I studied in this jumble of concrete and yellow London brick when it was considerably younger, though not much cleaner. It was a rude introduction to city life, close to shopping streets, take-aways, pubs and clubs (many now gone). There were great views from the elevated whitewashed studios over the city rooftops and away in either direction to the Welsh hillsides and the sea. What better place to be an art student! I can only hope the move away from city life doesn't transform the Welsh capital's art college into something far more inward looking and tranquil in spirit.

Three of my favorite student works this year had received a "Helen Gregory Memorial Trust" award, which is particularly appropriate for me because Helen was a student in my year at Howard Gardens. She was an intelligent enquiring person with a political mind and social concience, but was tragically shot dead whilst on holiday not long after graduating. This year in the show the students' statements of intent are displayed next to their work and very many were intelligent and worldly.

The ground floor studio held some gems. Esther Burns (Estie.B) created for herself an alternative persona who (with a straight face) poked fun at the art world, inviting visitors to participate in the quest for a place in the pantheons of modern art history. Nearby was site-specific sculptor Georgia Hall, whose work appealed to my architectural sensibilities. In this instance she'd wrapped the college fittings, ductwork and radiators with plaster - maybe she'll do the same to the exterior of the building as a (literally) fitting monument!

On the first floor were Beth Marriott's exquisite matchbox objects whose task was to recreate memories for an elderly relative who suffered from dementia. The motive was laudable and the results were compelling. Further up the building (via the Ilustration show inexplicably turfed with grass) were Elaine Begley's layered wax memory cubes, again fascinating objects (though the memories seemed to be her own).

Don't get me wrong now, there were also some engaging and expertly crafted two-dimensional artworks on display as well - Annie Suganami and Helen Bur immediately spring to mind. But they fell short for me when it came to realising a self-reflective engagement with context. But there was certainly something for everyone - Helen Bur's people-focused paintings were selling well and clearly what the punters wanted!

Altogether another impressive annual output from Cardiff Art College. I studied there because it had a reputation for its diverse output and it clearly upholds its reputation into the new century. I only hope it continues to attract forward looking students when it is no longer in the living heart of the city!