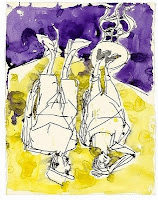 Next stop was the V & A for the exhibition about the British 'Aesthetic Movement'. This is probably one of the best and most engrossing exhibitions I have ever visited anywhere, well worth the £12 entry. It is fascinating that a movement which professed to promote 'beauty' in place of the staid symbolism of the Academy was seen as such a dangerous threat by the status quo!
Posted by Sean K at 00:30